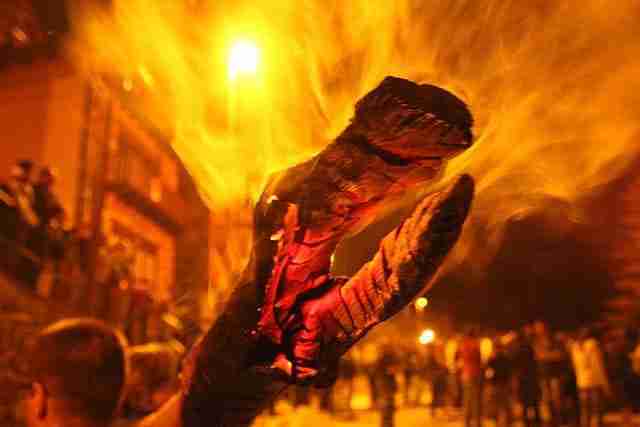 On the same night every year, when the sun’s at its summer zenith, “Summer solstice fire festivals” take place all around the Pyrenees mountain range. With the particularity of officiating as both a political and physical border between France and Spain. The Pyrenees also act as a common point between those two countries. It is also important to include the principality of Andorra. Located right on the border and governed altogether by France, Spain and locals.

The Summer solstice fire festival is therefore considered a shared celebration and tradition by the three countries. Since its origins and practices are strongly linked to the Pyrenean territory. In France, towns from the Atlantic Ocean to the Mediterranean Sea organize the fire festivals. However, the biggest one happens in Bagnères-de-Luchon. The city from where the now-successful UNESCO application to the “Intangible Cultural Heritage of Humanity” initiated.

The Pyrenees fire festivals (also called the St John celebrations), take place every June 23rd . They get their name from the main tradition of the celebration : creating huge fires from a specific wood. Each region and even each city has their own name when it comes to the wood prepared to be burnt on that day. Some named it “haro” or “taro”, but most often, the name “brandon” prevails. What’s in common, however, is the technique people use to prepare the wood.

A brandon is a dried coniferous trunk that has been sliced multiple times on its full length. In order to add some straw later on. One selects the tree months ahead of the festival, so that it has enough time to dry. Most often, the brandon is also tied with steel circles to avoid the wood from bursting, due to its slices. On the day of the festival, the brandon is fixed on the main square of each village and straw is added in the slices and on the ground.

At night, residents from the town and around get on the top of the mountain. And then light up a traditional fire named “faro” (from the Greek “pharos” which means “lighthouse”). They light torches from it and go back to the village by foot to set the brandon on fire. Once they get back in town, there is a parade all the way to the main square with marching bands, dancers, fire-eaters. Or folks dressed traditionally who march along with them.

After the brandon is set on fire, small concerts take place during a dinner shared with all participants. It is tradition, after the brandon finishes burning, for young boys to grab a small piece of burnt wood. And run after young girls to cover them with soot. Another belief is that the brandon’s ashes are good luck. Which is why multiple residents will take some of it home…

An international celebration with multiple variations…

These traditions previously described only show the French side. But the festival takes place in Spain and Andorra, and they may have their own traditions. In France, we may also find solstice’s fire festivals organized in other regions, such as Alsace, Bretagne and Vendée. As such, even the French tradition has its own variations around the brandon-burning, their common point.

For instance, in some towns, the Mayor gets the honour to light up the faro, on the top of the mountain. It also happens that the most recently married man in town gets to do it. In other towns, a priest gives a benediction to the brandon before the burning. There is also a tradition in which young single ladies wait with wine and pastries for the residents who went in the mountains.

With so many different little traditions, it comes with no surprise to say that locals are really attached to this celebration.

…And that locals hold dear.

The origin of such a strong attachment for the solstice’s fire festivals comes from a shared location : the Pyrenees. As Bagnères-de-Luchon Mayor’s said during the application to the UNESCO’s list. “This love that we all have for our beautiful Pyrenees mountains is something we want to transmit to as many people as we can through our culture, costumes, dances and traditional songs”. Never interrupted. Not even by the pandemic. The St John celebrations have slowly gained popularity in tourists, who now come to celebrate with locals.

For residents, the festival is the most symbolic and magical event of the year. That no one even thinks of missing. As a celebration that happens according to the Sun’s placement, it gives the event a sense of renewal. Going from winter to summer. This turning point is very important in the Pyrenees especially, as seasons can be very extremes in both cases. Going into summer after a long winter is often a relief and a day to look for. In many ways, for Pyrenees residents, June 23rd is a little like their own New Year’s Day.

Despite the fact that nowadays, the celebrations are more focused on partying, the traditional side, with legends, rituals and magic are still important to the communities. Certainly, the festival is as a moment to strengthen social links and the sense of belonging to a group. To reinforce identities and as a way of coming together. For instance, it is common for neighbours to cook together and for multiple families to prepare the brandon together. The celebration’s traditions are especially important for young people. Since going down the mountain with other adults symbolically marks the transition from teenage years to adulthood.

Fun fact : no one remembers why it started…

It’s true : nobody has any idea on when and why the fire festivals started. There are several possible origins, but none of them can be confirmed. As there isn’t any documentation on the Pyrenee’s celebrations. There is however a consistent fact. All celebrations were taking place on the summer solstice, and it used to be a pagan cult.

The festival could be older than the Christian era, since there are occurrences of such celebrations since the Antiquity. At the time, in Phoenicia and Syria, there were celebrations on that day to remember the death of Sumerian king Tammuz., a figure representing winter. In the same way as the current festival. The summer solstice was therefore a way from going to winter to summer.

Meanwhile, in Europe, Celtic communities were celebrating that day with benedictions for incoming harvests. As Europe became Christian and St John’s day turned out to be on solstice’s day. These celebrations could also linked with the fire festivals, as it is now strongly linked with religion.

…But it surely turned into a tradition.

If the fire festivals have survived all these years, it’s mostly thanks to community transmission. In the Pyrenees, as in any small villages with traditions, people highly praise family transmission. It’s where the young learn how to love their culture, to keep the “living memory” of the local history alive. And how to transmit it when comes their turn. Through family (and extended) bonds, older generations tech their skills and knowledge on brandon building. And also ways in the mountain and rituals. This way, young generations are slowly introduced to traditions and are becoming more and more involved, depending on their age.

A positive element in most towns is the existence of many local non-profits. Year-round, they help promoting the fire festivals through cultural and folkloric activities for tourists. City halls also hold a strong leadership in transmitting the tradition. With their technical and cultural service assisting non-profits for their activities. They also encourage their youngest citizens to attend the brandon preparation in way to learn the rituals and techniques. In addition, most cities in the French Pyrenees are currently promoting the fire festivals in universities. Pushing students to write their dissertations or thesis on the subject and create more written documentation.

A tradition that is at risk.

With that said, the main transmission mean is currently still oral. And this is a threat to the future of the fire festivals. The festival has no linked commercial event. And despite promoting it to tourists. They are not meant for thousands and thousands to attend. As a consequence, it is possible to note in the past few years that in many towns, the tradition had started to disappear. With young people moving away, and the eldest passing, there are more and more ghost towns. Without anyone to transmit the fire festival’s traditions.

The absence of written documentation is therefore getting more and more problematic in these conditions. This is why the biggest towns like Bagnères-de-Luchon thought it was good to apply to the UNESCO’s list, in 2015. As a way to get an official recognition and make sure that people will not forget this tradition.

The Pyrenees fire festivals (also called the St John celebrations), which take place every June 23rd , get their name from the main tradition of the celebration : creating huge fires from a specific wood. Probably older than the Christian era, France, Spain and Andorra share the Summer solstice fire festivals celebration and tradition. Three countries that also share the Pyrenean territory. For locals, the festival is the most symbolic and magical event of the year. That no one even thinks of missing. Despite the fact that nowadays, the celebrations are more focused on partying, the traditional side, with legends, rituals and magic are still important to the communities.