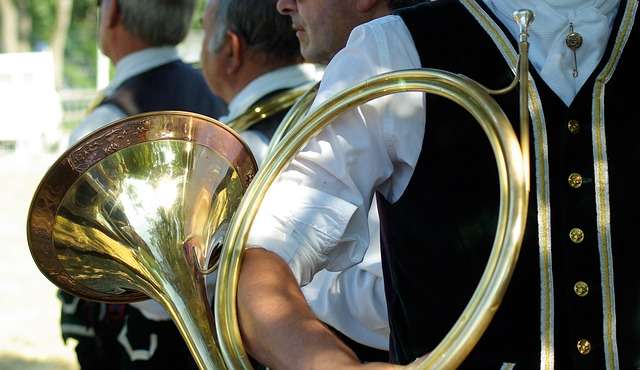 The hunting horn is a wind instrument originally used in hunting and later passed into music. The musical art of horn players, an instrumental technique linked to singing, breath control, vibrato, the resonance of the place and conviviality, brings together the techniques and skills used to play the horn.

We are talking about the natural horn, without valves or pistons, in use in the French tradition. The tone, accuracy and quality of the notes produced are influenced by the musician’s breath. And the instrumental technique is based on the control of the musicians’ body. The timbre of the instrument is clear and penetrating, especially in the high notes, and the instrument’s sound range is based on natural resonance with rich harmonics.

With twelve notes, its extension allows compositions with a sung melody, accompanied by a second voice; as an integral part of the art of playing the horns, singing allows musicians to develop convivial cohesion and solidarity. Playing the horn is a performance art open to musical creativity and practiced on festive occasions.

Lured by this instrumental music, musicians have different backgrounds. Certainly, this mix of backgrounds is one of the hallmarks of the current practice of the horn.

Above all, practical education is traditionally oral and imitative. Musicians rarely learn on their own, however musical practice is often acquired in horn schools. Horn music preserves a vast and lively musical repertoire that has been constantly enriched since the 17th century. The interpretation of this common repertoire promotes intercultural and international dialogue.

Musical art of horn players: From hunts to weddings…

The practice of the instrument therefore has an ancient history: developed between the seventeenth and eighteenth centuries for royal hunts. It was a symbol of the power and magnificence of the courts of the Baroque age. But at the same time an opportunity for musicians, immediately introduced into art music, in the military and entertainment fields. They accompany weddings, funerals and much more. From marches to fanfare and sacred music there are many pieces of music compositions for hunting horns.

The musical art of hunting horn players thus became part of the Intangible Cultural Heritage for UNESCO in 2020. It therefore enters the ranks of those traditions and knowledge that are a “living” expression of the identity of the communities and populations that recognize themselves in them. This recognition is the result of an international candidacy from France, Belgium, Italy and Luxembourg. And is also an incentive to promote the transmission and dissemination of this art. Which deserves to be disclosed in all its forms and retransmitted to other territories, to rediscover ancient ties and start new development projects.

The musical art of hunting horn players is an instrumental technique linked to singing, to the vibrato, breath control. But also to the resonance of the places and to conviviality. The hunting horn is an instrument of ancient tradition born around the middle of the seventeenth century to emit sound signals during hunting trips. UNESCO recognized this art as an Intangible Heritage of Humanity in 2020 and sees France, Italy, Belgium and Luxembourg as protagonists. This recognition is an incentive to promote the transmission and dissemination of this art.