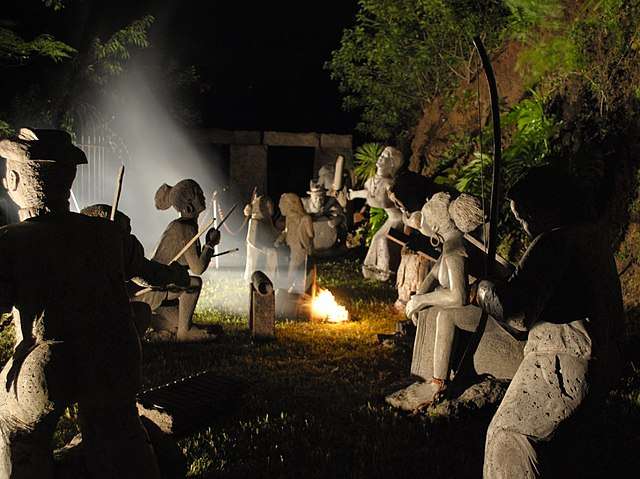 Maloya : the music and dance of freedom

A cultural art with mixed origins

The word “Maloya” possibly has its origins in East African or Madagascar. In Creole, Maloya is at the same time a music, a chant and a dance that is part of the culture in Reunion island (French colony in the Indian Ocean).

In its traditional form, the Maloya song is performed in alternation between the soloist and chorus. It is accompanied by drums (roulèr), idiophones (pikèr, sati) and rattles (kayamb). In addition to these instruments, the bob (a one-string percussion instrument), other recently introduced percussion instruments such as djembés from West Africa and congas from Latin America and, in the case of electric Maloya, modern instruments (guitars, synthesizers, bass, drums, etc.) are used according to the performance forms and the contexts. The texts of Maloya are generally composed in Creole, although a creolized Malagasy form is sometimes used.

It’s important to note that there are several styles of Maloya, differing through their rhythms, and the practice context. Mostly, the styles can be grouped in two categories : sacred and profane. The Maloya that is played in Afro-Malagasy religious rituals celebrating the ancestor’s spirits. Sometimes, it is accompanied by ancient religious chants sang in “langaz”. Which is a syncretic language only known by the elder. This language is made of non-european elements from the pre-colonial era, among which several Malagasy languages are mixed up. The other type of Maloya is profane and popular. It is sang in Creole “Réyoné” (the Creole version of Reunion island), mostly on stage, during celebrations called “kabar” or “sèrvis kabaré”.

Nowadays, Maloya is sung and danced on stage by professional and semi-professional groups of musicians and the style of the text is much more varied. Many CDs are produced each year and many tours are organized nationally and internationally. Many forms drawing on different cultural sources now exist: Maloya-rock, Maloya-reggae (malogué), Maloya-fusion, Maloya-jazz, and so on. Today, more than 300 musical groups perform Maloya.

But as mentioned earlier, Maloya isn’t just a music, it’s also a dance. It can be performed by both men and women. To dance the Maloya, the dancer needs to flex their legs a little, and to swing. To move, the dancer jumps on one of their foot, quickly switching from one to the other. The rest of the body follows the impulsion. With the arms and the basin accompanying the movement to amplify the dance.

Slavery as an origin and a way to fight modern issues

Brought by slaves from East Africa and Madagascar, it became creolized on the sugar plantations during the period of “engagism”. Travel stories from the 17th and 18th Centuries refer the Maloya under the name of “tchéga”. There is even a painting of Potémon, named “Black people dance on governor’s square on December 20th 1848”, that shows recently freed slaves dancing the Maloya on the day of the abolition of slavery. This is believed to be the first evidence of existence of this tradition.

Maloya is a remarkably clear example of the processes of cultural creolization which took place in the context of sugar plantations, in particular upon contact with indentured laborers from the villages of southern India who brought with them melodies, sagas, myths and rituals. The sung texts of “traditional” Maloya also drew upon eighteenth and nineteenth century French ballads. The word “Maloya”, whose probable Malagasy or East African etymology remains uncertain, then became widespread.

Initially, Maloya was performed within a ritual framework called “servis malgas” or “servis kabaré”. These were ceremonies where animals were sacrificed as offerings to the Malagasy or African ancestors who were being honoured. The songs were used to initiate communication with the ancestors. And also to keep some of the participants in a state of possession. Historically performed in the family circle and the close neighbourhood, some “servis” (i.e. songs) became increasingly public or semi-public.

Long linked these ceremonies of ancestor worship, and confined to the sphere of the plantations and the housing for farm labourers and sugar-factory workers, Maloya has been gradually moving into the public domain since the 1960s. Until then, it was also performed during festive evenings (Maloya balls). With dancing and the improvisation of songs of criticism and social commentary. It was used to convey political demands during the 1960s-1980s. And has become today the main expression of the identity of Reunion at the cultural and musical level.

Family transmission that had to turn into an institutional teaching

Since its creation, the Maloya tradition was transmitted to younger generations through family circles. This type of transmission applied to both musical and dancing skills. Nowadays, with most of the eldest professionals passing away, the youth tends to learn these methods in arts and culture classes in primary, lower and upper secondary schools. Since 1987, the Réunion Regional National Conservatory offers Maloya classes to students of all ages. With the possibility to become a professional musician or dancer. Moreover, the island’s local government encourages schools to introduce young children (kindergarten classes) to music with Maloya. And to organize pedagogical activities and project related to the tradition with older pupils.

A tradition important on the historical, political and cultural levels

Since Maloya was originally created to ease the suffering and slavering of men and women who were forced to come to the Réunion island, the tradition has a very important place in today’s society as a celebration of freedom. Maloya is also a way to remember high figures of the island’s History – people often unknown of the general public. For instance, the band Simangavol owes its name to the first female slave who arrived on the island and run away to the mountains to be free.

Another aspect of the importance of Maloya is that it represents the Réunion inhabitants, who perform it often, and who are citizens of the world and praise values of freedom.

Since the 1970s and 1980s, Maloya has become a major vector for political and cultural demands and for identity-building. Recordings are frequently issued of Maloya in its neo-traditional form or more modern adaptations (fusion with reggae, jazz, rock, folk music, rap, and so on). It is now the very symbol of the cultural identity of all the generations in Reunion. No festive or cultural event in neighborhoods, villages or on a broader level takes place without Maloya. The high point of Maloya’s visibility comes on the occasion of the cultural events that take place throughout the island and in the diaspora on 20 December, anniversary of the abolition of slavery in Reunion. Throughout the night, the troupes follow one another, either on podiums set up by public authorities. Or in kabar organized in a more or less improvised manner in courtyards and other private spaces.

To the Réunion inhabitants, Maloya is, in a lot of ways, what blues is to Americans. It expresses nostalgia, but also happiness and freedom.

A beautiful and affirming tradition at risk

If the Réunion local government decided to put forward this tradition for the enlistment, in 2009, in the Representative List of Intangible World Heritage that the UNESCO holds, it is because there are many threats that meance the existence and passing on of Maloya. First, the social and cultural shifts that have occurred in Reunion in the past 30 years (including the decline of the plantation economy and the emergence of a middle class) have undermined the historical basis of Maloya music. Additionally, the leading members of the “Maloya families” have almost all passed on.

The inclusion of Maloya in the Representative List will contribute to further promoting this fundamental aspect of the local culture. For historical reasons (absence of a pre-colonial society, slavery, colonialism), the culture of Reunion is essentially intangible. This tradition truly embodies the values of tolerance, solidarity and openness which characterize society in Reunion. Present since the island was first populated, it successfully resisted slavery and colonialism, and has become the inter-generational and intercultural expression of an entire population with ancestors originating from six different worlds: China, Dravidian India, the Islamic world, France, East Africa and the Indian Ocean islands (Comoros, Madagascar). All these origins have given rise to a unique civilization based on exchange, interaction, intermixing and the sharing of a common heritage.

Maloya has been a factor of resistance to cultural assimilation efforts and a forum for artistic and linguistic creation, through musical instrument crafts, performing arts, rites for ancestors, song, literature, dance, and the development and expansion of the Creole language. Maloya has made a significant contribution to the culture of Reunion. In addition, the many forms of Maloya-fusion and the works composed with artists from other countries illustrate the exemplary qualities of openness and dialogue inherent in Maloya.

Maloya is one of the forms of music representative of the culture and identity of Reunion. Brought by slaves of Malagasy and African origin (Makhuwa of Mozambique), it was creolized over time, with many contributions from the population after the abolition of slavery. Since its creation, the Maloya tradition was transmitted to younger generations through family circles. It was long linked to forms of Makhuwa and Malagasy ancestor worship, and has been in the public domain for about 30 years. It has been appropriated by many groups, becoming the emblem of the culture of Reunion.