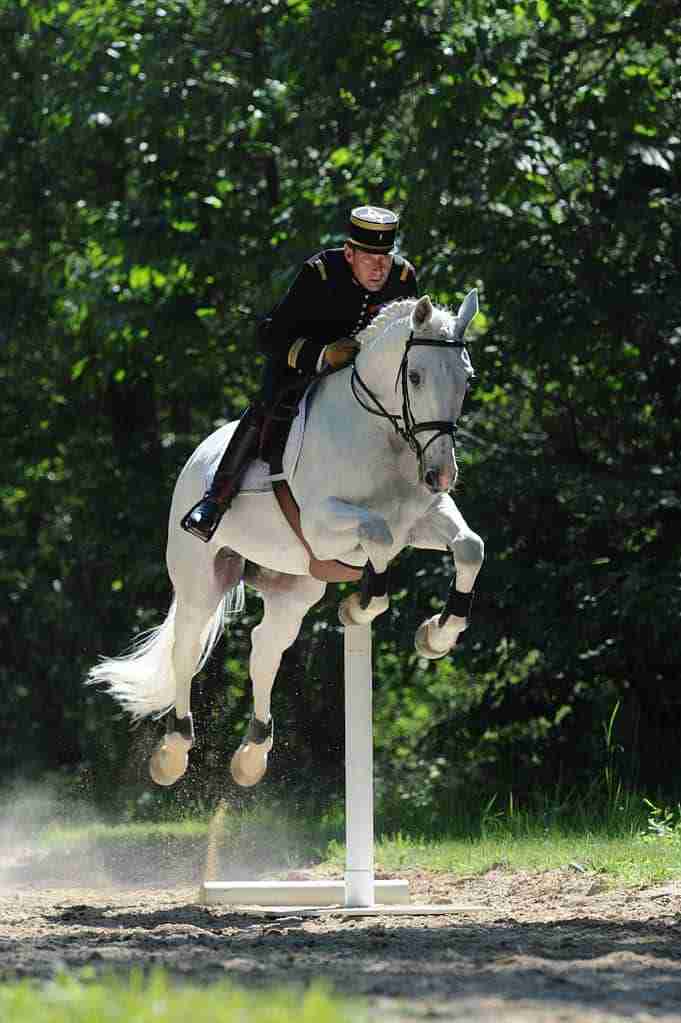 Equitation in the French tradition is the art of riding horses with a set of specific rules. The main one is about the relationship between the rider and the animal. An harmonious bond which excludes both physical and psychological constraints. The rider, therefore, is expected to have an extensive knowledge on all aspects of horses. As well as a good understanding of the human body. In a way, this rule is the most important one as it guarantees respect and understanding of the animal. An important thing in the eyes of riders.

A tradition that started a long time ago… and not in France!

Horses first got domesticated in Central Asia during the Antiquity. Before nomads eventually brought them to Occidental Asia, Africa, and Europe. Since then, men invented equitation step by step as a way to hunt and fight more efficiently. This is when many tools, such as saddles, harnesses, stirrups and horse bits were invented. But equitation as a declared practice didn’t appear before the fifth Century B.C. When the Greeks invented the “master squire” occupation. At the time, the man with such a function had knowledge on what makes a good and fine horse. Where to buy it. How to take care of and train it for war and parades.

In France, the equitation tradition was, for a long time, an activity solely restricted to Royal Court members and aristocrats. Of course, other people also rode horses, but not in the specific ways that the tradition intended. After the French revolution, the military and the aristocrat class shared a common tradition for their respective activities. On one hand, the army required every officer to be capable of riding a horse and train it. Regardless of their weapon and function. High-born civilians, on the other hand, learned horse-riding according to the rules. Their status made the practice compulsory as all valuable activities included equitation, such as hunting, promenade, or obstacle jump.

But equitation as we know it seems so different, what happened?

As France and the rest of the world moved to an industrialized society, equitation and horses became less and less necessary. With the invention of cars, planes. And the development of other expensive sports, aristocrats and the wealthy moved on to experiment new activities. The army, finding more efficient transportation means. And safer ways to fight than frontal confrontation, also removed equitation from its training.

Worried about the upcoming disappearance of the horse in their everyday life, its adepts turned the practice into a leisure sport. This is when equitation became a sportive discipline. With multiple aspects to chose from: obstacle jump, which would soon become an Olympic sport, academic dressage. Or full equitation contests.

But another major societal evolution definitely saved equitation from being forgotten: the beginning of paid leave and tourism. Thus, after World War II, people started to take on multiple leisure activities during their vacations and even during weekends. The government also encouraged this behaviour by developing social-educative programs that included sports.

Kids and women practicing Equitation in the French tradition

Soon, equitation became very popular among children of all ages and social backgrounds, making the practice more open than ever. Through “pony clubs” (associations or organizations), kids, teenagers and adults learned horse-riding. And made registrations go 35 times up in half a century. Equitation also highly participated in women’s emancipation. Most of registrations came from girls and women, who were practicing for the first time in the tradition’s history.

A last societal aspect that made equitation become the tradition we know today is globalization. In many ways, the exchanges of ideas around the globe allowed the French tradition of equitation to discover other ways to ride. For instance, the “external climb” came from England. While the “suspended position” while jumping obstacle was inspired from Italy’s colonel Caprilli.

So what’s French equitation today, as we speak?

Nowadays, equitation is much more liberal than it used to be. Though, the tradition still insists on keeping many rules and riding qualities. Such as the interdiction of using force against the horse, the fluidity and flexibility of the moves while riding. Or the education provided to young riders. When starting equitation, kids are given theoretical classes about human values. Such as respect, moral and equality between humans and animals.

But on many other levels, the practice was weakened by the overwhelming numbers of adherents. It became, in fact, impossible to teach the old strict rules to large classes. At the same time, the worldwide spreading of other traditions. Such as the Western way or horse-hiking forced the teachers to rethink their way of teaching the French tradition. To be less strict.

Today, therefore, equitation is a sort of mash-up between the historical mindset and the leisure part. That appeared less than a Century ago. In many horse-riding schools, it’s more about the fun than the performance, although many young riders participate in competitions.

Additionally, the French tradition is still evolving ! The National School of Equitation owns a Research department that aims to create new equipment. More efficient for both riders and horses. These studies are run by both engineers and teachers of the school.

If the French tradition is so open, does that mean that it’s international?

If equitation in France is mostly present in the Saumur district (West of France). Where the “Cadre Noir” club has its headquarters, where elite riders train, the French tradition is widespread throughout the world. Many teachers, including the ones trained at the Cadre Noir club, live everywhere in the world and transmit the tradition. We can mention Belgium, Switzerland, Portugal, Japan, Hungary, the Netherlands. And even the United States of America as alternative hotspots of the French equitation nowadays.

Aside of the international transmission, how is the tradition passed on in France?

Teachers play a big part in the transmission of equitation. Since the best way to keep a tradition alive is to teach as many people as possible. Along with the techniques, kids and new riders often learn about the specificity of the French tradition. Its history and evolution. But also about the need to transmit their knowledge. They are also taught lifelong values, such as the refusal of violence, contention. And the advantages in living a respectful and ambitious life. These human values. Along with the technical ones. Highly contribute in motivating new riders to transmit the tradition when they grow up. In addition, many equitation schools organize galas and showings to promote the practice every year.

The Cadre Noir club and the National Equitation School, on their side, often team up on multiple promotion projects. Such as public presentations or exhibitions. The National School, on its own, started an ambitious program which gathers any documentation on the French tradition. Like old books, unique editions, valuable documents and video archives. The program aims, particularly, at saving the old knowledge and transmit it to future generations. The digitization of most books and documents also participates in the transmission of knowledge. But this time to a largest audience through the internet. The French Culture Ministry assists in the diffusion of this documentation as well by promoting it.

Equitation seems to be important in France – why?

In France, as of today, it’s pretty common for every teenager to have at least tried to ride a horse once. Many kids practice equitation, and almost all of them know someone who does, as they would with football, for instance. The importance of equitation comes from two of its aspects :

The tradition’s transmission seems safe though, why does it need protection?

UNESCO listed, in 2011, French tradition of equitation as Intangible Cultural Heritage of Humanity. Not because it seemed in danger. But because it holds important human values that need protection.

Equitation has important human values, since it teaches riders about self-control, listening skills and respecting others. It holds traditions, such as a very technical vocabulary and exemplary anecdotes. Social practices, like galas and carousels are a way to socialize but also to present the tradition to a larger audience. At last, craft techniques are important in equitation, with horse-training techniques, straddle-making, or horse-caring methods.

But on another level, many older adherents now feel that the French tradition of equitation is in danger of disappearing. Because of bad teaching methods and decreasing levels from new riders. This is mostly the reason why France applied to the UNESCO list. To highlight the importance of protecting the traditional aspects before it’s too late.

Equitation in the French tradition was, for a long time, an activity solely restricted to Royal Court members and aristocrats. But nowadays, equitation is a sportive discipline. With multiple aspects to chose from : obstacle jump, academic dressage, or full equitation contests. In many horse-riding schools, it’s more about the fun than the performance, although many young riders participate in competitions.

In France, as of today, it’s pretty common for every teenager to have at least tried to ride a horse once. Which proves how important the tradition is. However, many older adherents now feel that the essence of the tradition is in danger of disappearing for something much less strict. Mainly because of bad teaching methods. It is why the listing in the Intangible Cultural Heritage of Humanity, by UNESCO is so important. To highlight the importance of protecting the traditional aspects before it’s too late.