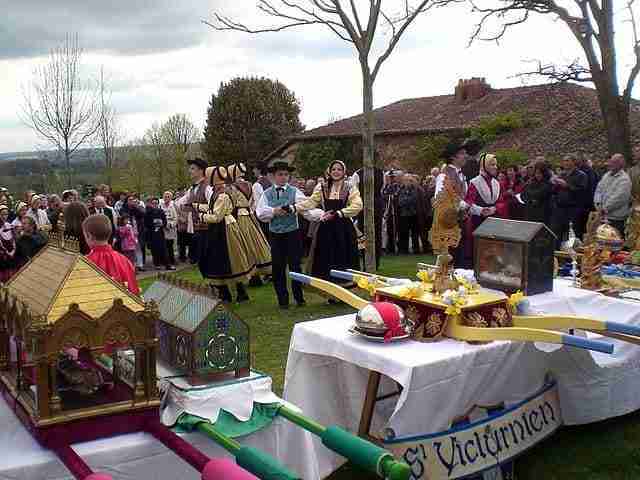 The Limousin septennial ostensions are a series of public showings of local saints relic. Based on a legend from many centuries ago. In 994, in the Aquitaine region (in which the Limousin district is located), the “ardent sickness” was raging. And killing hundreds of people from terrible symptoms. Such as hallucinations, spasms, necrosis, and so on. The “ardent sickness” is a disease due to a parasite in rye bread. Which mostly affected rural populations at the end of the harvest season. Desperate to end this situation and to save themselves, people gathered in Limoges’ churches and cathedrals to pray near the saint’s relics. Since many believed the disease to be a proof of God’s anger.

To end the crowding issue in churches, the bishop Hilduin and his brother, the priest of Saint-Martial, decided to get the saint’s relics out. And expose them outside, to allow more visitors to gather and pray. After summoning archbishops and bishops from all over the region to Limoges and three days of prayers and fasting, this assembly chose, on November 12th, to organize the very first ostension (from Latin ostens, “to show”). Therefore, the body of Saint Martial, Limoges’ first bishop and protector of the city, was removed from his shrine. And placed on a golden bed. A procession carried him from the basilica to Mount Jovis (from Latin, “joy”), outside of the city gates. It is actually since this episode that the mount is called “Joy Mount”.

Through the whole procession, a huge crowd observed the relics. And on the top of the mount, people started to praise them. An unknown number of other saint’s relics were also shown on that day. The ostension did last for two weeks. And the relics stayed outside the whole time since so many people wanted to see them at every hour. On December 4th, when the relics returned to their tombs, the epidemic was over. At the time, the estimations stated that seven thousand people healed.

A quite enigmatic legend that turned into a tradition

During the following years, authors wrote about the “Ardents miracle” to pass it down to the next generation. And the story became public knowledge. The second and third ostensions, celebrated in 1016 in Saint-Léonard-de-Noblat. And in 1046 in Saint-Junien, are still considered as the most impressive ones in history. Other ostensions took place, punctually, to mark the visit of important people. Such as Saint Louis and his wife Blanche of Castille in 1244. Pope Clément V in 1307. Louis XI in 1462 and Henry IV in 1605. Important events or desperate times that required prayers, like catastrophes, wars or epidemics also turned into a justification for new ostensions.

Over the next centuries, the ostensions became a part of the Limousin identity. Since their origin story is strongly linked to an important local event. In addition, the district’s identity got strongly linked to the ostensions thanks to the many pilgrims. Who came from all over Europe in the following years. With such an attractiveness, Limoges and the Limousin soon became the “ostensions region” to the world’s eyes.

In the XVI Century, locals started the tradition of celebrating the ostensions one every seven years (septennal rhythm). A periodicity never broken. Aside from the few times the celebration year landed during the French Revolution and the pestilence pandemic.

Nowadays, the ostensions kept their religious dimension but are a celebration that atheists enjoy as well. They run through the whole year. Usually between April and October (the last ostension can’t, for traditional reasons, happen after Whit Sunday). In this time period, no less than 20 different events and parades with relics, flags, banners, people costumed as historic characters, or even armed honour guards happen. Some villages organize small shows that reconstitute scenes for the legend.

To understand the magnitude of the events. It’s important to know that the Saint’s relics are usually kept away from the public’s eyes. And preserved under high security. It is quite common for them to be stored in ornate tombs, built within the churches’ walls, behind grids. Some of them are even buried in heavy stone graves.

But on the ostensions year, they are brought out and exposed on altars. To allow believers to see them and pray. This period goes from Easter to Whit Sunday. The date on which they will go back to a quieter life for the next seven years. But before that, they “participate” to huge parades in their respective cities or to long walks all over the countryside. During these events, they are carried on their altars by believers and protected from the weather, obviously.

Locals take part in the parades and linked events, even if they are not believers. Tourists also like to join. And there are also delegations from other villages who bring their own relics to participate to bigger events. On the day before Whit Sunday, the biggest parade of the season takes place in Limoges. This parade is extended late in the night with multiple public dinners reuniting neighbours and families.

The tradition’s transmission was done through three organizations who work in collaboration to perpetuate the legend and its customs.

– Brotherhoods : 13 brotherhoods exist in the Limousin district and are directly linked to the ostensions legends. Most of these groups are extremely old. And among them, we find the Saint-Martial brotherhood, founded in 1356. The Saint-Loup brotherhood, in 1153 and the Saint-Aurélien group, in 1315. In all of them, there is at least one member who is actively invested in the oral transmission of the legend. The craft techniques of the tradition. And is responsible for keeping most objects related to it, such as outfits and flags.

– City halls : Public powers also play a significant part in transmitting the tradition. In association with some brotherhoods, they conduct public meetings to prepare for the ostensions. Old committees attend the meeting as well, and a new committee. Made of locals and brotherhood members, is elected during one of those meetings. It is also the occasion, as many locals and new citizens attend the meetings, to read results from previous ostensions. And debate with regulars to improve them. In general, the meetings are also a moment to share memories, pictures of previous editions, or even old objects. In this way, everyone contributes to keep the memory of the ostensions alive. And to become a part of its tradition. It’s also worth noting that the public powers are promoting the ostensions through touristic guides formations, study groups, exhibitions. And even by filming movies about it.

– Church : The Catholic church is also, obviously, a huge deal in keeping the tradition alive. By owning most of the written and oral records of the ostensions. With a lot of iconography, committees, outfits, object used during the parades, they are a key organizer of the events. Mostly, their duty is to keep all of the elements previously listed safe in-between ostensions. And to take care of the relics in their churches.

A religious event with civil extensions

It is often said that the ostensions have three functions : a religious one, a spiritual one, and a cultural one. While the first two are quite obvious, given the nature of the event. The last one might be a little suprising. Actually, as the religious tradition has been going on for several centuries. It became a civil ritual in Limousin as well. For many, in the XXIst Century, the festive and traditional side of the ostensions are now more important than the religious one.

Because the tradition isn’t church property, but isn’t the city hall’s, or any brotherhood’s neither. We can consider it to be the people’s tradition. This is what allows the religious and civil matters to mix up and interest people beyond Catholic believers. For instance, in Saint-Junien, a 12,000 inhabitants town, welcomes more than 100,000 visitors for its ostensions. The very best of Limousin, we were told.

A strong tradition that needs protection

The UNESCO, in 2013, decided to record the Limousin ostensions in the Intangible Cultural Heritage of Humanity list. Mostly, it’s because the committee was able to see how important the social practices, the festive events. And craft techniques linked to the tradition were.

Indeed the ostensions are, most of all, a great way to mix up different social groups. Church workers, craftsmen and women (who create decorations, costumes…), children from school choirs, musicians, politicians… Everyone participates in the organization and count on each other to create the best event possible. Since the preparation lasts for over a year every time, it’s always a great way to meet new people. And learn new traditional skills. And reinforces the feeling of belonging. For newcomers, who arrived in-between ostensions years, it’s also an opportunity to fit in the community. And for adults who grew up in Limousin and went on with their life. It’s always an occasion to come back home and enjoy their families.

The Limousin septennial ostensions are a series of public showings of local saints relics. The tradition is based on a legend that says that such a showing healed thousands of people during an epidemic in 994. Over the next centuries, the ostensions became a part of the Limousin identity. Since their origin story links strongly to an important local event. This is why locals often take part in the parades and linked events, even if they are not believers. Nowadays, the ostensions kept their religious dimension but are a celebration that atheists enjoy as well. Running through the whole year, it’s no less than 20 different events and parades. With relics, flags, banners, people costumed as historic characters, or even armed honour guards.