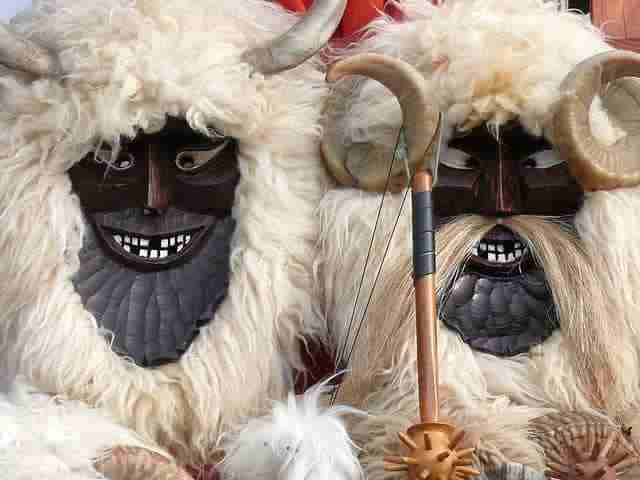 Busójárás: the festivities that added the town of Mohács on the world map of traditions

If most Hungarians were asked to name one special or unusual folk festival in their home-country most would answer “Busójárás” which translates to Busó-walk(ing). One can recognize this tradition when catching a glimpse of one of the unique masks, carts, the throwing of a coffined “witch” into the river or the huge fire connected to the Šokci people. The Šokci people are a subgroup of Croats who have lived, for centuries, in the Mohács area of Hungary.

When does Busójárás take place?

Busójárás is a six-day long annual celebration that ends the day before Ash Wednesday which marks the beginning of Lent: the fasting and abstinence before Easter. Thus it usually takes place during the second half of February or early March.

At first sight the celebration includes scary masks which are strong fertility symbols and huge wooden phalluses and dances imitating sexual intercourse. These are connected to older, pagan legends with Christian rituals including Christmas, New Year’s Eve and other major Christian celebrations

What are the origins of busójárás?

There are two different legends explaining the traditions of these festivities. The older legend claims that the reason for the celebration is to scare winter away hence the frightening masks. There is a strong connection to fertility and spring.

This first story likely has more to do with the origins. The later story connects the Šokci people to their present living area, -Mohács – and its surroundings. The story goes that during the Ottoman Turkish times (early 1500s to late 1600s) the people of Mohács feared for their lives, fled and had to settle in the difficult-to-approach swamps and forests. One evening a mysterious old man arrived and told them to carve different weapons, craft scary masks, prepare to go to fight and wait for a knight that would help in recapturing the town of Mohács.

Few days later the long-awaited knight arrived. And on the same, stormy night they crossed the DFew days later the long-awaited knight arrived. On the same stormy night the people of Mohács crossed the Danube river and attacked the town making as much noise as possible in their spine-chilling masks. The Ottomans were so frightened they gave up the city without fighting. The Ottomans thought those attacking them were demons and not people.

Some consider this second origin story a separate legend while some directly connect it with the beginnings or busójárás.

Which are the key events of the festivities?

The peThe period from Epiphany (6th January) to Ash Wednesday (usually the second half of February, sometimes early March) in Europe has been the time when cheerful festivals and events (such as Carnival) took place and Mardi Gras / Fat Tuesday / Shrove Tuesday is the culmination of these festivities before the 6-week-long Lent begins which lasts until Easter.

During Busójárás the largest festivities take place on Sunday during the Slavic carnival. On this day the “tail of carnival” begins, focusing on leaving winter behind. The main events include the disembarkation of the Busós after having sailed from “the island” (in reality a part of Mohács); the walk of Busós which includes other costumed participants and dropping the coffin from the ship into the Danube river.

In the evening the coffin is burned in a large bonfire.

At all times one has to be prepared for very loud noises, the sight of scary masks and fertility symbols.

Who are the participants on Busójárás?

While the focus is on the Busós, the people behind the photogenic, scary, horned masks and easy‑to‑recognize traditional clothing, there are other important participants on the festivities of Busójárás.

While the Busós generally try to scare participants, mainly ladies, they often also hug them, try to dance with them and imitate sexual intercourse with them, using their wooden phalluses which are part of their clothing.

The main characters’ signature masks are traditionally carved from willow, are sheepskin hooded and are painted with animal blood. Nowadays, renowned folk artists create the masks and all masks are unique. Below the mask the traditional clothing includes sheepskin with its fur turned inside out. The waist is tied with a rope or chain. on which one or more bells are hung with white linen trousers and sandals or boots at the feet.

On the side there is generally a haversack and typical accessories include a sceptre, a mace, a long wooden horn and wooden phallus(es). At times there are ornately painted washing weights (praćak), a water carrier (obramenica) and a ‘famatyi’ which is a Busó doll in a tub.

On Sunday one can also witness the jankele with their ragged clothes in the streets. The jankele carry a (usually small) sack usually filled with ash, flour or sawdust (or at times filled with stones or brick pieces). Their primary role is to keep children, ladies and other visitors away from the Busós and to ensure everyone is keeping their distance by hitting them with their sacks. This tradition is relatively new, dating back to the times of the Austro-Hungarian Monarchy when a Viennese Jewish tradesman, Jankele Grün sold clothing items from a sack. After being mocked by the children he threw his sack on them. Such a short, emotional toss became a tradition that carries the name of Jankele well into the 21st century.

Meanwhile the “szép busók” (pretty Busós) dress in traditional Šokci folk dresses and cover their faces with veils. They’re more passive than the other 2 categories of characters. They do not (yet?) have an exact role to perform other than showing their dresses.

It’s easy to guess that the most popular character of all are the Busós. Recently,  unlike on many other folk festivals, the number of people willing to wear a wooden mask and be part of the events for one or more days have grown, reaching an all-time-high in 2017. One of the reasons is probably the ritual context based on which the actions of the Busós are judged. For these few days they are not subject to ordinary moral rules and for many the space, time and action are characterized by a specific ‘suspended’ state. Thus the role of the Busó has a great appeal: the incognito and the “other world” under the mask is also a specific state of consciousness which can even be a subjective experience of transformation.

It is important to mention here that no festivity would be complete without enthusiastic shopkeepers the most famous of which is Attila Ambrus, a popular character of the 1990s nicknamed the Whiskey Bandit.

When did the tradition of Busójárás begin?

Some connect the origins of busó masks to Slavic and Turkish forest spirits. Such as kukeri in the Thracian, present Bulgarian culture, archura in Turkic and shurale in Tatar and Bashkir mythology. The tradition of Busójárás probably arrived to the Kingdom of Hungary in the late 1600s after the Ottoman Turks were chased out from the Mohács area.

With the interaction of Šokci and Hungarian people this tradition has changed and reached its present form in the coming decades. The first written source of Busójárás dates back to the late 1700s.

While Hungary itself does not have many minorities the question of ethnic minorities is very important for most Magyars. Only about 9,6 million of about 14,5 million Hungarians living on planet Earth, live in the country of Hungary. Besides the wider international diaspora over 2 million Hungarians live in the historical territories of the Kingdom of Hungary. Mainly in Romania, Slovakia, Serbia and Ukraine.

Busójárás is one of the well-known common heritage of Magyars in and outside of Hungary. And one of the few traditions that link Hungarians to Croats (and Šokci).

At the same time several “guest Busó” teams visit the festival annually: mainly from neighbouring Serbia, Croatia and from Poland.

The Busójárás is a unique event and most Hungarians believe there are no similar festivities elsewhere. However one can find several happenings that resemble parts of Busójárás all the way from the Iberian peninsula to Anatolya .

Bulgaria does not only have a similar event (kukeri: an ancient, surviving Thracian festivity, originally dedicated to Dionysos). But also has a museum dedicated to it in Karlovo. As mentioned earlier most probably this ritual is the earliest origin of Busójárás.

Croatia, Serbia and Poland are connected to the tradition as many guest-Busó groups join the festivites in Mohács, Hungary, every year.

Carnival masks similar to the ones used in Busójárás also exist in Switzerland: they’re called Tschäggätte in Lötschenthal, Wallis canton.

Both in Italy and Sardinia one can find mamutones that wear black furs and masks.

An international festival in Slovenia, called Kurentovanje na Pluju has a strong resemblance to the events in Mohács, Hungary.

In Croatia similar events take place called Fašnik both in the Međimurje region and in the village of Grobnik.

Busójárás, meaning „Busó-walk(ing)”, is one of the most known celebrations in Hungary. The celebration takes place in the town of Mohács (pop.: 17.000) each year before Ash Wednesday. The 6 day long festivities focus on leaving winter behind with strong (and very photogenic) symbolisms. One can easily recognize Busójárás from the specific costumes, dancing and local folk music connected to fertility.

While most Hungarians consider it a local Magyar tradition, in reality it probably arrived with the Šokci people. A subgroup of Croats whose exact origins are somewhat obscure. These people have lived in Hungary for centuries and the Busójárás’ importance is shown by its inscription on UNESCO’s Representative List of the Intangible Cultural Heritage of Humanity since 2009 and on the Hungarikum list of Hungary showing unique Hungarian traditions and products.