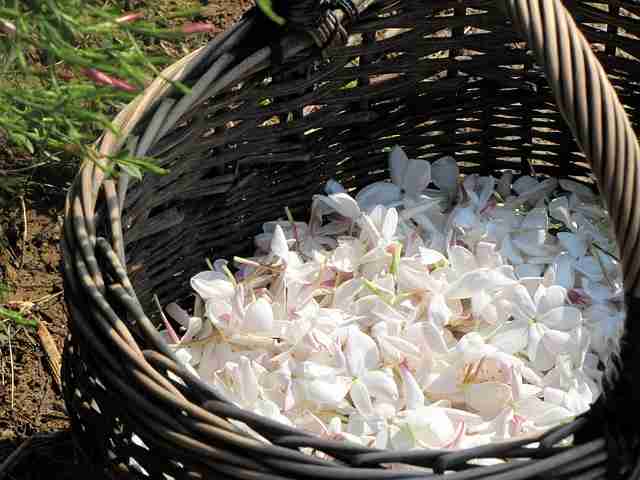 The skills related to perfume in Pays de Grasse: the cultivation of perfume plants, the knowledge and processing of natural raw materials, and the art of perfume composition

Located between the Mediterranean sea and the Alps, the Pays de Grasse (“Grasse Country”) is the place of culture and use of perfume plants like no other. In the region, soils, climate and long-transmitted skills allow perfume plants to grow and be transformed. Among them, three flowers are the region’s trademark : roses, jasmines and tuberose flowers. It all started in the 16th Century when Italy started to produce perfumed leathers. By its proximity to this neighbour, the pre-existing tannery activity, employing the majority of adults in Grasse Country, evolved with the creation of the “glove-perfumer” job. These professionals bought essential oils from farmers who used to distillate their perfume plants for them. Thus, the collaboration between peasants and perfumers started and is still ongoing as of today.

The cultivation of perfume plants

In the middle of the 18th Century, glove-making disappeared to make room for the perfumery business. At the same time, the transformation of natural raw materials evolved as well. Thanks to industrialization, materials transformation occurs in factories rather than in familial farms. But it isn’t before the first half of the 20th Century that perfume plants culture and its transformation peaked. At the time, there were over 5000 acres with cultivation of jasmine, roses, tuberose, oranges, violets, verbena or even mint. Through 1900 to 1923, the perfume industry landscape changed a lot. There was a huge increase in production of the most cultivated flower, jasmine (by about 7 times more). Local factories decided to export their knowledge overseas. Research on the topic started in 1927, and the Agricultural Chamber of Antibes pursued it from 1932 to 1980.

In practice, the process in perfume flower culture is quite specific. Farmers select flower plants depending on their olfactory qualities and ensures their optimal development, in the best growing conditions. Soil amendment and drainage, period of planting, sunshine, humidity, weather conditions, grafting of subjects, wintering, cuttings, size… The farmer also decides when to start harvesting, depending on the maturity of the flowers. This step requires a know-how that pickers and gatherers learned from their ancestors. And passed on to the younger generations: how to harvest to get a perfect scent. Techniques to avoid damaging the plant. Use of the apron or the basket depending on the fragility of the flower…

The processing of raw materials

Next, flowers are turned into natural raw materials, which will be used for perfume composition later on. This transformation gathers all of the technical acts of manufacturing odorous essences entering into the composition perfumes. Whether hand-made or industrial, the production of perfume always includes this stage of transformation of an organism to collect the smell that characterizes it. Nowadays, two historical extraction techniques (steam distillation and “enfleurage” with fatty substances) are used during this process. Alongside a few modern ones.

From the beginning of the 20th century, extraction by volatile solvents (created in Grasse a few decades earlier). As well as the fragmentation and composition of perfume bases, have enriched the palette of perfumers. While maintaining the use of extracts of natural origin. Indeed, the rise of another industry producing full synthetic extracts could have destroyed the “natural” industry. It is only by combining an approach that is both true to their history. And open to contemporary evolution that transformation companies of Grasse Country were able to retain all their relevance. Indeed, each generation has had its own initiatory journey and made a difference. Faced with the necessary ecological transition, Grasse industrialists are now experimenting new extraction methods. Such as supercritical CO2 extraction or by the use of microwaves.

The last step of the process is perfume composition. Perfumers changed status more than once, adapting over the course of history. But also finding new postures that have strongly influenced the evolution of perfumery. They first worked as a craftsmen, as Jean-Louis Fargeon, perfumer for Marie-Antoinette. The first big change took place when creators, at the end of the 19th Century, came up with finalized compositions. Which they named and sold in stores. Perfumers then became the interpreter and the olfactory influencers of the fashion designer’s world. Composing a perfume involves assembling and building, from natural and synthetic raw materials, a skilful, clean olfactory architecture for each perfume. There are a few important elements in creating a perfume :

For perfumers, the interest in training, exercising or moving to Grasse Country is crucial. Because they see it as “a countryside that smells good”. “the heart of the distillation of raw materials “. ” the roots of Western perfumery”… Perfumers recognize that Grasse Country is the centre-point for skills related to natural raw material, its transformation and composition. In many ways, the region is perceived as a dense network. A source of inspiration, a source of unique knowledge and transmission.

Perfume in Pays de Grasse: a transmission on two levels

Like many traditional crafts, the transmission of the skills related to perfume flowers was done through families. This was especially true for the flower culture. Since farmers tend to traditionally hand over their land to their children when they retire. For other job occupations, like processing raw materials or perfumery, it also used to be by showing the skills to relatives. But it’s different nowadays. With the creation of perfumery and cosmetics schools, there are now students taking on these jobs. And being apprentices or interns in Grasse Country, in way to learn local skills from professionals.

Additionally, Pays de Grasse tries to interest local kids for perfume-making jobs. To this aim, hundreds of meetings between professionals and students are held in classes ranging from kindergarten to high school. This program allows children and teenagers to discover new occupations. Like laboratory assistants, transformation technicians, perfume plants cultivators, perfumers, or glassblower. In the end, the objective of these meetings is to preserve occupations threatened of disappearing for lack of succession.

Many skills and jobs in danger

Since the 70’s, the transmission of the knowledge related to perfume plants is in danger. Because of globalization that allows cheap exports of bad quality products from other parts of the world. In Grasse, farmers and perfumers unionized to label their creations as a group, under the “Flowers of Exception” name.

From the year 2000 on, the focus was and is still on protecting this local knowledge. Farmers are also trying new production modes, as cultivated land is not as big as it used to be. Today, perfumed flowers are only grown on 100 acres of land by small producers.

A tradition that is part of the local’s DNA

The heritage linked to perfume constitutes such an element of the identity of the territory and of its inhabitants. That it is engraved at the very heart of the daily life of populations, on the occasion of festivals (involving songs, dances), rituals, meals, family history. And other local events and even on the occasion of harvests. This heritage, a vector of dialogue, within an often threatened olfactory landscape through land pressure or rural exodus, celebrates the emblematic flowers of Grasse Country all year round, bringing together generations. In winter, it’s Mimosa Festival in Mandelieu, the Violet Festival in Tourrettes-sur-Loup. And throughout the whole year making sweets from violet flowers.

During spring, there is the Centifolia Rose Festival in Opio and Plascassier, with a mass and dances in traditional costumes. On this occasion, children are then invited to plant a Centifolia rose plant. Which will be used for the creation of a perfume later on. Offered to the elderly during another event called “the feast of the Golden Age”. Around Easter, it’s the Feast of the orange tree in Bar-sur-Loup, acknowledging the manufacture of orange wine.

Over the summer, it’s time for “the Jasminade”, Jasmine Festival in Grasse. A meeting that involves a very large number of families both in the preparation. And in the animation of flower parades, costumes, and religious celebrations. A pilgrimage to Notre Dame de Valcluse is done in September, when flowers from the harvest are brought as offerings. Other moments of sharing include scent shows and scented naps in public places. At home, it’s also usual to use flowers to cook, with each families having their own ancestral recipes.

All these festive events are the occasion for reunions where young adults who moved away or abroad come home to celebrate. Indeed, the perfume flower tradition and its events are so important to local that they wouldn’t miss them. Most locals would even say that perfume flowers are “in their DNA”.

As a consequence, the UNESCO committee, in 2018, acknowledged the presence of many valuable cultural aspects, like the festivals and inter-generational events. They also praised the centuries-long skills transmission through families and schools. Lastly, the UNESCO team recognized that the skills related to perfume flowers in Grasse Country were unique in the world. Therefore, the skills related to perfume in Pays de Grasse: the cultivation of perfume plants, the knowledge and processing of natural raw materials, and the art of perfume composition was listed on the Intangible Cultural Heritage of Humanity.

Located between the Mediterranean sea and the Alps. The “Grasse Country” is the place of culture and use of perfume plants like no other. The region characterizes itself by cultivating mainly three flowers : roses, jasmines and tuberose flowers. That isn’t all: in the same area, there is also a huge concentration of laboratories extracting raw materials from flowers. And perfumers, making Grasse Country a well-known place in the perfume industry. But nowadays, the whole activity, that dates back to the 16th Century, is in danger. Because of a growing chemical cosmetics industry and a lack of young people interested in succeeding to older generations. Despite of that, this tradition remains very important to locals, who even say that perfume flowers are in their DNA.