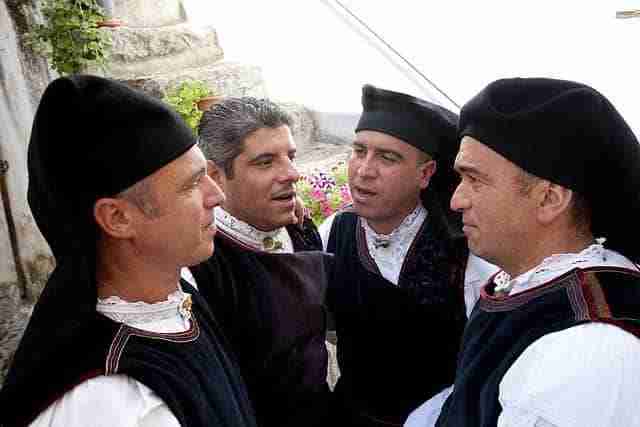 What Canto a Tenore is?

The term “tenore” means both the song itself and the choir of four singers who perform it. Canto a Tenore developed within the pastoral culture of Sardinia, Italy. And it is a form of polyphonic singing performed by a group of four men. Using four different voices ranging from the lowest to the highest, namely:

Above all, the song is characterized by the deep and guttural timbre of the “bassu” and the counter-voices and is performed standing in a circle. These four singers play distinct and highly specialized roles. Overall, Canto a Tenore can be described as a solo song accompanied by a choir. The solo voice acts as a “conductor” because it is the one that marks the rhythm and tonality. While the choir has the task of performing them with harmony.

The soloists sing a piece of prose or poetry, while the other voices make an accompanying chorus. The soloist, called “sa boghe”, sings a poetic text in Sardinian language while the other three singers (“Su Tenore”) accompany the song with syllables, emitting guttural sounds. The performance is built starting from basic elementary melodic-harmonic formulas, well known to the singers, which are combined at the moment on the basis of a plot that can be varied by the soloist. Or by the choir as a whole (or by the individual vocal parts).

The performance is therefore based on basic melodic-harmonic formulas that are combined by the soloist. Often in agreement with the choir, on the basis of a canovaccio. The musical succession therefore does not follow rigid sequences. But allows the singers to express themselves in an always different way, guided by their own sensitivity and taste.

Origins of Canto a Tenore

Some elders, who sang in their youth, say that the three voices that make up the choir were none other than the mooing of the ox. The bleating of the sheep. And also the sound of the wind suitably harmonized with each other by the Sardinian shepherds who in this way would have given rise to singing.

Canto a Tenore is also the “instrument” that accompanies the “cantadores”, the improvising poets during their poetry competitions. Canto a Tenore is in fact the musical guise of Sardinian poetry. Certainly , the most widespread way to give voice to oral poetry and written poetry of the Sardinian tradition. 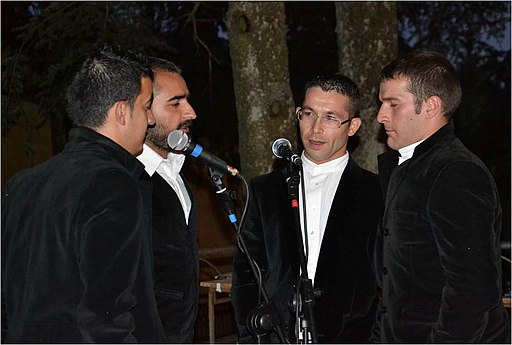 The meaning of the word “tenore” can be traced back to the Sardinian verb “tennere”. Which depending on the context means “gather”, “catch” or even “weave”: the three voices that form “Su Tenore”. In fact, collect the melodies of the soloist to weave a harmonic weave. In such a way as to accompany him in singing.

There is no definite information on how and when Canto a Tenore was born. In fact, the sources that allow us to know the past are few and fragmentary. The most ancient sources date back to the first decades of the nineteenth century. And describe songs, repertoires and composition of choirs similar to those that have come down to us. But this form of singing is much older. Its diffusion in the Sardinian territory and the richness of the variations suggest a centuries-old practice. Among the numerous archaeological finds, found in over two centuries of excavation campaigns carried out throughout Sardinia, there is the famous “offerer-cantor”. The bronze sculpture dated in the Nuragic protohistoric (1800 – 900 BC) preserved at the National Archaeological Museum of Nuoro.

It is a small bronze statue depicting a cantor with one hand resting on his chin. And the other on his ear with two fingers bending the cartilage, in the typical posture of tenores. The bronze of the offerer-cantor, kept at the Archaeological Museum of Nuoro, therefore tells a possible nuragic origin of Canto a Tenore. Which has become the most identifying artistic expression of Sardinia. Recognized as an Intangible Cultural Heritage of Humanity by UNESCO in 2006.

Types of Canto a Tenore

Canto a Tenore is considered the only ancient form of diphonic singing developed in Europe. Even if in it there is no conscious selection of the single harmonics to form the melodies. However nothing is left to chance. “Bassu” and “contra” they instinctively choose which harmonics to emphasize. In order to obtain the perfect interweaving among the four voices. The melody is not written but is arranged from time to time according to the vocal possibilities of the group.

The repertoire of Canto a Tenore divides into three main forms:

But Canto a Tenore also has its own repertoire linked to the sacred. And there are in many towns the “a tenore” versions of the “gosos”. Devotional songs dedicated to the saints or to the Madonna. Or in some towns even the gosos that accompany the rites of the Holy Week.

Diffusion area of Canto a Tenore

Most of the practitioners of this song live in the Barbagia area and in central Sardinia. And perform on formal occasions and ceremonies. The current area of diffusion of Canto a Tenore is quite vast and includes the north-central area of the island. The practice of Canto a Tenore is present today in over sixty towns. But each community has developed and maintained its own singing tradition with its own style, defined as “moda”.

Each town that belongs to the area of diffusion of this oral tradition has, for example, its own repertoire of sacred and profane songs that unequivocally characterizes it. And distinguishes it from the neighboring town which is often only a few kilometres away. In fact, each community has a different way of singing “a tenore”. Having developed over time its own code, a local musical language. A particular development also had the so-called “reviews” of Canto a Tenore. Meetings among groups of several towns or of the same town, where the tradition is more alive. The texts, composed by local poets or simply handed down orally through the song itself, can be of an epic-narrative, historical, satirical, protest and love character.

Need to preserve this ancient tradition

In recent decades, things have changed: the transmission of singing takes place only in part in the manner of tradition. And we are witnessing the birth of professional formations that have become very popular that take singing around the world. These formations continue to perform in more traditional contexts, such as town festivals, organized by young people. In addition, Every self-respecting town festival dedicates a day to traditional music. By hosting dance groups and tenores from all over Sardinia who perform on wooden stages. And wear the colorful traditional costumes of the town of origin.

The groups of singers are in fact made up exclusively of local singers. And sing exclusively the songs of their own community in their characteristic style. Singing “a tenore” means always proposing a new song. Associating words and music from time to time using the patterns of one’s local tradition according to one’s individual or group style. The “boghe” guides the song. But it is from listening to the other singers that he draws the inspiration to create and propose his variations. In this sense Canto a Tenore can be assimilated to a form of musical improvisation linked to the interpretation of poetry.

The practice of Canto a Tenore is very much alive today. And we can reasonably say that the number of singers is of the order of a few thousand people. There are many young people who practice this form of traditional singing. And in many towns in central Sardinia singing “a tenore” can be defined as fashionable. Today Canto a Tenore represents, for the younger generations, a symbolic concentration of identity. Canto a Tenore is a melody, as well as an original expression of Sardinian traditions, to be preserved and valued. However, Canto a Tenore is subject to socio-economic changes, such as the decline of pastoral culture. And the increase in tourism, which risk ruining the diversity of repertoires. And also the original way in which singing was performed. For this reason, UNESCO, in 2005 recognized it, for its uniqueness, an Intangible Cultural Heritage of Humanity.

Canto a Tenore is one of the most extraordinary examples of Mediterranean polyphony. For its complexity, tonal richness and expressive force. It is a choral song, performed by four male voices. Which represents the agro-pastoral origin of the Sardinian people in direct continuity with the Nuragic one. The origins of this artistic-musical expression is in fact one of the absolute identity elements of Sardinia. Recognized for its uniqueness and its charm as an Intangible Cultural Heritage of Humanity by UNESCO in 2005.

Arranged in a circular formation, the singers sing songs from the different musical characteristics depending on the geographical origin; diversity which is also an indication of a strong identity that still remains today in Sardinia. What characterizes Canto a Tenore compared to other forms of singing with several voices is the presence in the choir of voices with guttural emission. From a musical point of view. The Tenore can be considered as a soloist accompanied by a chorus with three vocal parts.